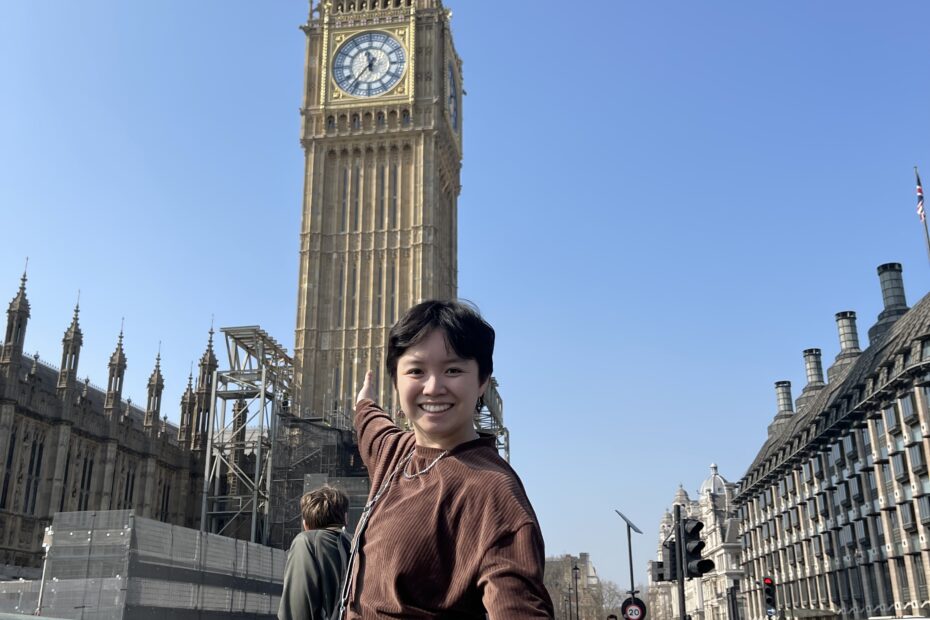 As I’ve mentioned before, DIS offers two weeks of travel: one dedicated to independent travel and the other is with your core course. For Travel Week 2, my core course traveled to London, England! I’ve always wanted to go to London, so I was super ecstatic to hear that I would be coming here with my class for the week. The nice thing about traveling with my class was that most things were paid for! (flights, accommodations, public transportation, and 2 meals) — I saved so much money because of this, especially since London is such an expensive city. We went to London from March 19-24, 2022.

We got to the airport at 1:30 PM and it was super chill and pretty seamless going through border control since we were leaving the EU and entering the UK. We had a personal bus that took us to Ibis Hotel which was located near Chelsea. I wish I had explored that area more because I happened to walk around there my last day in London, and I definitely missed out on some cool spots – more of a reason to come back! London is just so big so even though we were there for quite some time, we didn’t get to see everything we wanted to, and definitely did not get to explore each town within London.

Everyone was pretty hungry since we hadn’t eaten all day. Our class had dinner at this Japanese restaurant called Inamo and we just kept having dish after dish. The dishes were tasty, but I wasn’t a big fan of their sushi. The ambiance at the restaurant was really nice though and I liked that there were techy games on the table.

We were really hoping to receive dessert with our meal but didn’t so we went on an adventure for some ice cream. We walked over to Udderlicious and she was yum. Such a variety of flavors and it was so hard to pick but I got cookies and cream ice cream.

Afterwards, we figured we’d walk around and explore night life in London. And let me just say, it was popping. So many people walking everywhere and coming from LA, I really missed being in that environment. We passed by the Harry Potter station which was beautiful from the outside and even walked through Chinatown. We were walking around SOHO which is an LGBTQ+ friendly neighborhood. I was pretty tired so I was down to settle here for the night, but we had recommendations to go to this one gay club called Heaven, so we pushed through and made our way there.

The line was way passed out the door and wrapped around the building. We waited for an hour, but it was totally worth it. Easily the best club I had ever been to in my life. The cover fee was only 5 pounds and coat check was 1. Good vibes with the bomb music and really cool lights. Environment was also friendly since a majority of the people were queer. They even brought in a drag queen! A great way to end the night, and a good impression of London from the beginning. The tube (which is the metro in London) does not really run past midnight, so that’s something to be aware of. We ended up taking an Uber back to our place and it wasn’t too expensive since we split it among 4 people.

The next day, we went to Saatchi Gallery. Mie chose to bring us here because of the special photo exhibit they were displaying at the time. It made me think about media through a photographer’s lens, and how the way a person receives a message highly depends on context.

After our exploration into that exhibit, our class took us to eat fish and chips at the Champion (classic meal to have while you’re in London)! It was very delicious and fancy. I was so full! For dessert, I got sticky toffee pudding and it was yum as well (another must try in London).

At 2:30 PM, we had a walking tour of Notting Hill (one of the richest neighborhoods in London). Such a cute little town and I loved the modernity of it. As I explored London more, it kept reminding me of New York City (but bigger, better, and cleaner…), and Notting Hill definitely screamed that. The colorful, pastel houses reminded me of Copenhagen but I loved the palette of this much more. Apparently, houses on that street are not allowed to have the same color as the person right next door of their’s (cool fact!), so each house has their own individual color.

After our dinner, we explored Portobello Road which is a street filled with vintage and charity shops and basically a street market vibe. Would recommend checking this area out as there is so much to do around.

For dinner, we went to Chinatown and it was filled with red lanterns hanging above. Definitely one of the most decorative chinatowns I’ve been to, and I almost said it was the best but I wasn’t able to venture out to enough spots to make a verdict. We went to Beijing Dumpling which has really good chinese food and I have not had good Asian food in so long, so this was a blessing. The broccoli was so yummy, delicious fried squid, and tasty xiao long bao. Family style with a group is a great because you get such a huge variety!

In the morning, we walked through Brompton which had pretty houses so I had to snap some pictures. This was on our way to the Embassy of Denmark in the U.S.

We had some extra time so we strolled through Hyde Park which is humungous and definitely gives Central Park vibes. We were pressed for time so we didn’t get to leisure around, but I would have walked around and relaxed in the park a bit. Then, we walked to Buckingham Palace which is where the Queen stays when she’s in London. It’s very beautiful from the outside and has an extravagant gate.

With our class, we went to the Museum of Brands and the exhibit was small but had a lot of cute, aesthetic looking brands. It was interesting to explore and look at how brands have changed their logos or the way they deliver their products over decades. I saw a One Direction shrine here which was awesome!

Later that night, we watched the Book of Mormon and it was definitely not what I expected. A funny musical indeed.

We got a private bus and made our way to Oxford! It was approximately 2 hours away and I learned that the University is basically made up by the towns surrounding it. There’s not a set-in stone campus per se, it’s just that entire area. Lots of beautiful buildings and history. Learning about how rigorous and prestigious Oxford was lowk intimidated me :0

After returning from Oxford in the evening, I’ve been wanting to take an Uber boat on the Thames so we got a ticket and it was so beautiful and lovely. For dinner we got pizza and then we got boba afterwards (they have gongcha!) We just explored the London area at night so we got to see Trafalgar Square, Westminster Abbey (beautiful details), and Big Ben.

To start off our day, we went to Super Blue which is an immersive museum where it’s very dystopian and gives film noir vibes. The purpose is to relax you and it helps that participants are focused on the bubbles and just that.

After the exhibit, we got to explore London during the day as well so we passed by the Big Ben and Westminster Abbey again. We also walked to South Bank and took the bus to the Borough Market. I would recommend coming to this food market since there’s so many different stalls and I don’t think you can go wrong at all.

After lunch, we walked through the Tower of London which was also super cool and big (and better than the London bridge imo ahah), and you end up near Potter Fields Park which is a nice, open area with a view of the river.

As a class, we got to ride the London Eye which is massive and can fit 20+ people in one carriage! Got good views of the city from above.

For dinner, we had Indian food at this popular place called Dishoom. We had a 5 course meal basically and it was so good and filling. So much to feast on!

To end our trip, we had tea at the Fortnum & Mason (hella boujee and nice). I didn’t think I would be full but we ate a lot of scones, mini sandwiches, and other desserts. Very rich, fresh, and delicious. Had to buy some food as souvenirs to go.

That was the end of our core course trip! Our schedules were filled with a variety of things we did with our class and it was paid for which was super nice. But we also had a ton of time to explore on our own which was cool. London is probably one of my favorite cities I’ve visited in Europe and maybe even in the world, so I’m definitely coming back. I ended up extending my trip since I had Thursday-Sunday off and so a couple of my friends went to Paris after this trip – stay tuned for that, see you!