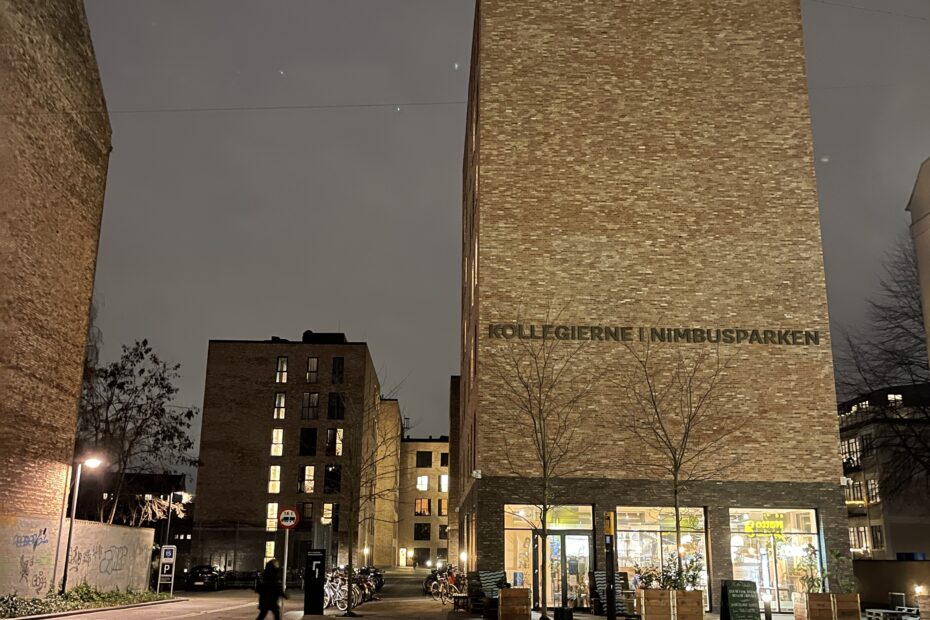 As I’ve explained in the housing guide, I live in a Kollegium called Nimbusparken in Frederiksberg. I’ve really enjoyed living here and I’m glad I got my first choice which was  Kollegium. So, let me just tell you a bit about it!

First, it’s about a 7 to 10 minute walk from the M1 / M2 Metro station (Finsenvej) so it’s not too far but a little bit further from prospective metro stations compared to other housing options. I enjoy the walk though and I love the Frederiksberg neighborhood. It’s considered as one of the more boujee places to live in Copenhagen and I can definitely attest to that. From the metro, it’s a 5 minute ride to Norreport station where you enter the city center and walk to DIS, which is another 10 minute walk so around a 20-25 minute commute to classes.

At Nimbus, there’s a bunch of random restaurants on the street and around the area. Netto is right in front of Nimbus which is very convenient for grocery shopping and it’s nice that I can get all my ingredients from that grocery store. Copenhagen in general is safe but I feel extremely safe walking around my neighborhood at any time of the day.

Different from other kollegiums, nimbus is comprised of 4 buildings around one another. I live in building 32 and in a flat with 5 people – 1 DIS roommate and 3 local flatmates. The locals tend to be Danish but they don’t have to be: our flat is hella international – we have a Chinese-Vietnamese, Korean, German, Norwegian, and Dane living together 😛 Then, we have two bathrooms and a full kitchen and living room. I really love this set up and my first impression from living here was that it felt like true adult living.

Things that contributed to this adult living life style was the fact that we’d all do our own things and come back at the end of the day to cook dinner. It has all the amenities a normal apartment would have whereas other housing options have more or less than what I deem as the norm (ie. not having a couch and TV or a full kitchen like my apartment does). It’s also far from other kollegiums and residential communities so that aspect of having to commute further also made me feel like an adult, especially because I was used to everything being so close to me at Davidson. I felt like I had to plan more in advanced to go out with friends and I felt mature because of that – people weren’t as accessible and I no longer lived a 5 minute walk away from friends.

The amenities at Nimbus are super nice. Like I said, I have a couch that I chill at and a TV for when I want to watch movies or whatever. Then, we have a dining table for us to eat dinner, full kitchen with a stove, oven, dishwasher and large fridge. We also have a balcony which is nice to hang out at once it gets warmer.

Although I really like living at Nimbus, I think a con is not knowing my neighbors. I wished there was a stronger community at Nimbus because then I feel like it would’ve been easier to make plans with people. It would’ve been nice to hang out with people in closer proximity, especially when you go out at night then you can go home together and all that. I was still able to go out, but that’s definitely something I craved. It’s also easier to cook with friends when you all live close to each other. It also allows more room for spontaneity. Nonetheless, I still had friends from other housing options come over to cook with me, or I went over to their place!