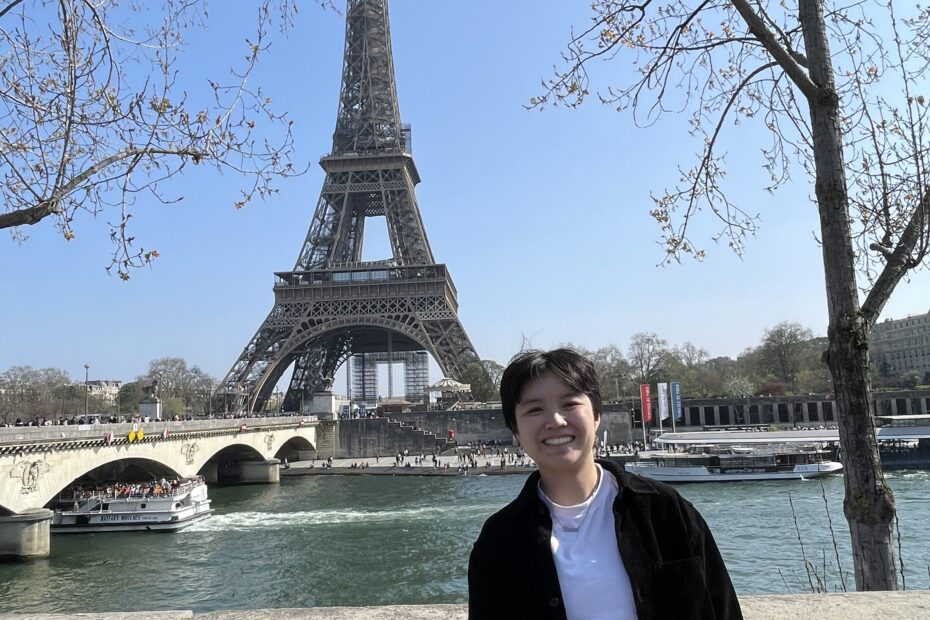 Whenever I hear about Paris, people are always like it’s overrated why would you want to go there? I’m here to tell you that it isn’t overrated and that it was totally worth going to. From London to Paris, you can easily take a train to there which is more comfortable and easier to go by, however, I didn’t know that so I took a flight. Since I’m studying abroad in Copenhagen, I have a Danish resident permit which makes me a EU resident for a while and that was convenient since almost all of the attractions in Paris are free for EU residents (clutch!). I went with a couple of friends after my Core Course week and we went from March 24-28, 2022.

Flew in to Paris Charles-De Gaulle Airport which is huge and pretty. From there, you can pay for a 10 euro train ticket into Paris which is a pretty good deal and it seemed like most people opted for this option. After arriving into the city center, I had to transfer on different lines to get to my hostel which was confusing. I got lost around 3 times and tbh Paris is probably one of the more confusing public transportation systems I’ve experienced. I also noticed that the trains move hella fast and people are constantly on the go. The trains were also really packed and I was on edge my entire train ride since people typically get pick-pocketed in Europe, but it seemed more apparent in Paris since even locals had their bags in front of them or between their legs to protect their belongings. After a long trek, I finally made it to my hostel, Le Montclair Montmartre — pretty good price for 4 people to share a private room and I can’t complain.

We started our day at 8:00 AM and made our way to Versailles Palace. It’s about an hour and a half away by train so we knew we had to start our day early. Make sure to get the right train ticket to Versailles because we didn’t know and used our Paris ticket and we were fined $35!

After that encounter, we explored Versailles for a couple of hours. Make sure to book tickets in advanced, even if you get them for free! It’s really huge and we also got to walk around the gardens for a while. We spent around 3 hours here so I would suggest blocking out 2-4 hours to have time to look around.

Afterwards, we took a train to Marches Des Infants Rouges which is a food market but it was lowkey a let down. Nonetheless, we got a big bomb sandwich from Chez Alain Miam Miam and we got a big customizable Sandwich for 12 euros. We split it among the 3 of us and it was still pretty filling.

Then, we headed to Le Marais which is known as the LGBTQ+ friendly area in Paris. There’s also a ton of charity shops around and this one chain in particular called Freepstar that has such a huge variety of options and for items that you can get for 5 euros which was amazing. I copped a couple of items there and I was very satisfied.

From there, we went to the Centre Pompidou which is a museum Grace wanted to check out and it looks really cool from the outside but they didn’t have that many art pieces on the inside and it was okay to us. We got pretty views of the city there though.

For dinner, we walked around Le Halles and wanted to do a food crawl. We ended up going to this one kebab restaurant and got a ton of kebab and fries and this lemon flavored 7 up. Very filling so we didn’t end up getting more food. We did get dessert at Behir Ice Cream since it seemed really popular and we got their Pistachio ice cream.

Afterwards, we had bought $13 tickets to climb the Eiffel Tower at night and I would say that it’s worth doing since we didn’t have to pay for any other attractions as EU residents for the time being. Very high up and intimidating but good views!

We started our morning off by going to the Louvre. We knew it was going to take some time so we wanted to get that out of the way in the morning. We explored and ofc saw the famous Mona Lisa! We waited 10 minutes and it was cool to stand near it so don’t let the line deter you!

After the Louvre, we visited 59 Rivoli which is a free museum full of a wide variety of art pieces. It’s very funky and has a wide assortment of moods. Totally worth visiting and a very cool exhibit for sure.

Saint-Chapelle and Notre Dame are nearby as well so make sure to buy tickets in advanced because we couldn’t get them at the door.

We walked along the Seine River which is beautiful and then there were so many stands on the side selling artwork, posters, and souvenirs. Make sure to have euros if you want to buy items!

For dinner, we ate at Bouillon Republique and we just beat the rush before there were was a rush. Bouillon is a french-style restaurant that is set up to be fancy but affordable for everyone. It was so good and I recommend going to any of the Bouillons — I loved ours tho! Ngl, could be one of the best food I’ve had in my life —  I just remember having a good time eating this food. We ate escargot, the meal of the day (beef with mashed potatoes), beef stew with fries, and some chocolate cream puffed dessert. The meal of the day was absolutely delicious. Make sure to ask the waiters for their suggestions!

We ended the night exploring night life in the Marais. It was hard to really find any gay bars but we found this La Mutinerie which is a lesbian bar that played EDM music.

Our hostel was near Sacre Coeur so we went up to check out the church. Views from outside of the church were beautiful but I wouldn’t prioritize coming here.

Afterwards, we were finally able to enter Sainte Chapelle and it was so worth it because it was just beautiful. Photos speak for themselves.

We bought items for a charcuterie board at a random farmer’s market called Westfield Forum Des Halles and then had a picnic at the Trocadero Gardens with a view of the Eiffel Tower.

Ended the day with walking around the Eiffel Tower and visiting Arc De Triomphe.