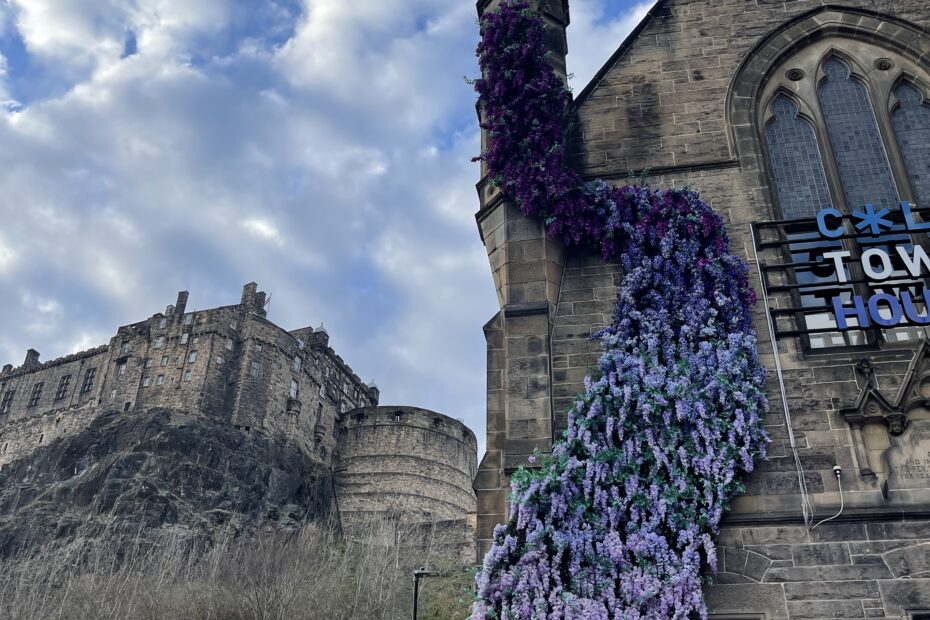 This will now officially be my second weekend trip this semester. Isn’t that crazy? I really feel like I’ve been traveling so much, and DIS really gives you the opportunity to do so with Travel weeks. This means that there’s not really a need to travel on the weekends, but some students still do so!

Anyways, let me tell you how I booked this spontaneous $58 round trip ticket to Edinburgh, Scotland the week before I went. I had been wanting to go to Edinburgh, and I was still pretty tired from my travels to London and Paris — but when I found out about these tickets, I had to go!

On Friday, April 1, I packed my things in one backpack (my personal item) and made my way to the airport. Since we had the cheapest tickets, we also had to wait in line to retrieve our tickets at the airport (so make sure you’re on time!) We ended up getting to Edinburgh at 4:00 PM.

From the airport, we took the Airlink 100 which is a 30-minute bus ride to the city center. We bought the open return ticket for £7.50, which means that we bought a roundtrip ticket where you can return to the airport whenever. We hopped onto the bus and we’re on our way.

Christina and I noticed that Scotland was much different from other places we visited — very green! The buildings were also much older and more historical. We arrived into the city center at 5:00 PM and the first thing we noticed was this giant, fancy looking monument — turns out it’s the Scott Monument!

From there, we walked 3 minutes to our hostel — St. Christopher’s Inn. We stayed at a 6-person mix dorm for $24.18 a night (the cheapest we could find). There were 18-people dorms but I would suggest paying a couple dollars more to have significantly less people as it was already crowded with the 6 of us. The showers and toilets were alright but, it is a hostel! Excellent location and good price for sure.

We still had the rest of our day ahead of us so we left our belongings and went out to explore Old Town. We walked around and were mesmerized by the buildings around us. A strong indicator that we were in Scotland was the fact that we could hear bagpipes being played everywhere!

We walked along the Royal Mile and ended up at Edinburgh Castle. She’s so high up! We didn’t want to pay £20 to go inside, but it was still pretty from the outside. The parking lot also provided some views from the city with the castle in the background.

After perusing for a bit, we decided that we should head to Calton Hill to catch some views and sunsets. We were so intrigued by the myriad number of diverse restaurants in the area. We went up to this one Indian place and noticed that it was one of the places Christina wanted to go to and since we were a bit hungry, we got Chicken Pakora there! (it was SOOO yummy)

We kept walking towards the hill and we were a bit lazy and didn’t wanna keep going up. Lemme tell you that you should keep going up! The views were so worth it. It was nice that the sun was out but I bet it’s even prettier when the weather’s great.

After visiting Calton Hill, we were pretty hungry so we went to dinner. We found this Nepalese/Indian restaurant by chance as we windowshopped (Gurkha) and it was pretty fire. We ordered a Mango Lassi, rice, Mo-Mo’s (dumplings), and butter chicken. All of it was sooo good, I was hella stuffed!

The next day, we started our day off at 7:30 AM to go to Arthur’s Seat! We didn’t know how long it would take for us to hike this volcano since we’re not that athletic, but we wanted to make sure that we had plenty of time to stop, rest, and take in the views. We also had an appointment later in the day so this was the best time to do it. Honestly, it was really nice to explore the city this early in the morning since it’s quiet, no one’s out, and it’s so peaceful!

Going to Arthur’s seat was pretty intimidating if you’re afraid of heights. Totally worth going up though since the views were magnificent. One of the best views I have ever seen in my life. I was definitely more afraid as we kept going up but was encouraged by other people passing by. Eventually I reached the top and to my surprise, there wasn’t actually a seat, just a monument thing? The hike took us 2-3 hours to go up and down but you can definitely finish it in a smaller amount of time. Also, remember to bring correct athletic wear! I didn’t but it would’ve been nicer for sure!

At 11 AM, we went back into the city for our city tour around Edinburgh. You can book your private tours through Airbnb and they’re around $15 to 20 – pretty worth it in my opinion since it doesn’t cost too much and you get to learn about the city’s rich history.

Afterwards, we went to Haggis Box since we figured that we’d have Scottish Haggis since it’s a traditional thing to get in Scotland. I wasn’t the biggest fan and I definitely think that it’s an acquired taste. Since we were hungry, we followed this snack with lunch at Ting Thai Caravan. Really good Thai food for an appropriate price imo. We got the Pad Ka Prow and Pad See Ew and I would recommend getting these dishes as well! I liked the Pad See Ew a lot and it was nice that we shared both with one another.

Since the University of Edinburgh was right next door, we decided to explore around a little to check the campus’s vibe. Very old and beautiful because of the architecture. Then we went to the National Museum of Scotland because it was free and we had extra time.

In the evening, we explored Victoria Street since everyone comes here for the beautiful painted buildings. The grassmarket is also a cute neighborhood near the castle. Also, for some reason, my perception of Edinburgh revolved around this long purple strip thing that dangled by a window. It’s at this place called Castle Rock and has a nice view of Edinburgh Castle in the background!

For dinner, we had more cultural food at Boteco Do Brasil. I hardly get Brazilian food so I figured that I might as well get some since they had an authentic restaurant in the area. Very yum!

Nightlife in Edinburgh was popping, and the Three Sisters in particular had good music. They also had plenty of outdoor and indoor seating. Pretty big and spacious with different music playing in and outside of the bar area.

The next day, we checked out and had brunch at Papii. I would recommend getting there early since it gets packed (and the cafe is a bit small). But, totally worth it and it tasted as good as it looked. Great way to end Edinburgh. Edinburgh is a very cute, small, and historical place – 2 to 3 days is definitely enough though and it’s so cheap from Copenhagen. Come along!